Let’s not forget novel. In 1990 brought the release of WordPerfect Office 3.0, adding Macintosh and UNIX to the client mix and supporting multiple servers with cross-server email, calendaring and scheduling. The next version 3.1 even included remote sync.

Today when try to understand email collaborative software, we think about something more than email and address book. It is also called unified messaging. Enables us to share calendar events and task lists, update presence information, advanced email routing, global/corporate address book, sharing documents and other media without having to attach it, email auto responders; most importantly, access to all these through push notification support from of your favorite desktop collaboration application, mobile, tablet, or just any web browser. Email collaboration systems are also expected to be integrated with the directory services as well as other collaboration system running within the enterprise.

While Microsoft showed the way, it was a locked down environment, once you are in exchange you have to stay with exchange. Exchange is closed source, proprietary; however Microsoft has been forces to open us their exchange protocols.  All these are not a bad thing, but in early 2000 Microsoft became a target for hackers and malwares due to their relatively weaker security design, which made many Microsoft exchange business to suffer due to viruses and downtime. Exchange turned out to be an expensive application in terms of hardware and management. With Microsoft Exchange the high maintenance and lack or reliability became evident at that point of time. Like many other systems Manager, I was also looking for an alternative.

Microsoft never got the server market they wanted to over from old UNIX but lost it to new Linux. Through they have been successful in taking over the major market share from Novel.

Systems managers have been looking for affordable stable alternatives to Microsoft Exchange. As the open source was the new future, they have been looking for open source open standard solutions. This gave birth to a new array of collaboration applications, like Zimbra, open-xchange, Citadel, egroupware, Zarafa. Through they are open source, they are not always free to use. You need to buy in to their closed source codes for Microsoft outlook connector and native mobile, exchange (Active sync) compatible client access. They also offered some useful advanced options like backup and archiving options for a price.

But the open source business also gave birth to another business model, which some calls “true open source” which offers all features for free but only charges you for implementation and support, if you need it. I just came across couple of interesting projects like Sogo, which is free. Integrated with OpenChange can provide the same end-user experience as any other open or closed source platforms, like outlook connectors and exchange sync. These two projects potentially look strong. They are more likely to be used with small and medium startups, those who are not ready to make any budget commitments.

Whether we like it or not Microsoft outlook is a matured email collaboration client and I haven’t come across something which can easily move me into another client without having to sacrifice some of the features I am spoiled with. Same goes with Active sync protocol, which has been adopted by most of the smart phone/tablet vendors.

Unified messaging/email collaboration on the cloud

Cloud has become one of the biggest buzzword in last few years. While hotmail has been providing 3mb mailboxes, gmail came out on 21 March 2004 offering a gigabyte of storage, showing us how useful cloud storage can be (which sounded almost like a hoax back at that time). Science then we have been using our gmail account to store useful files alongside the useless junks. Organized, partially organized or in a disorganized way (If you are like me). Google extended their service to corporate with google apps at August 2006. They introduced free and now charging a premium for it. Alongside email this now includes storage, directory service, calendar, document sharing, calendar and task list with instant messaging etc. This service is also very well integrated with other google free services, like search, youtube etc.  While many small and medium enterprises got into cloud right away with googles free initial offer, big enterprises also started buying in to this cloud service due to the ensurance of high availability and very little administrative overhead.

I find the following tradeoffs using google apps, limited access to data, limited backup, no control over downtime and maintenance schedule, agreement with google exposes your data to third parties and other google services in varies ways. Most of them are equivalent of application hosting in a public cloud.  Google apps are single vendor dependent, which means you always have to be in peace with google and its apps. Data migration is possible but is not straight forward. We see companies trying to opt out from google apps for some of the above listed reasons. Making business productivity tools for enterprises is not googles business focus.

As I mentioned before for a medium enterprises there was a point google apps was an obvious choice, I mean nothing is cheaper then free. As google started charging for it and if you would want to avoid the down side of publicly hosted cloud apps, you probably go back searching for in-house/private cloud solution. You would also want to have some choices. Integration and open standard is a priority. It is also important your existing infrastructure and collaboration platform talks to the new platform.

Zimbra is a matured product has been out in a market for a while now. Founded on 2003 Zimbra has come a long way with their version 7. Initially bought by Yahoo and then by VMware. Fortunately Zimbra is now proudly showcased by VMware under the name of VMware Zimbra. Zimbra with VMware their sales channel has been changed, while support and the development team is probably the same. Zimbra is strategically competing against google apps and MS exchange. While the sales process has become slow and less aggressive for small clients they are apparently focusing on big enterprises. Educational and government discounts pricing have also disappeared from their website.

What will Zimbra provide

Zimbra also comes with out of the box Migration tools from Exchange, google apps

Zimlets are like plugins to Zimbra help you do additional integration with other applications. There are Zimlets for maps, translation, conferencing, project management, social network, asterisk, various CRM, ERP, while you write your own one using their provided API.

The rich integration feature makes it an exciting product to implement as integration possibilities are high with any other products, especially with the open source one.

Zimbra claims to support over million user installation, which looks is valid as ISPs like Comcast users Zimbra. I have personally managed installation ranging from few of hundred to a few thousand in both commercial and open source implementation without any major modification. For base installation Zimbra recommends 2.0 GHz processor with over 4GB rams on 64bit system.

Commercial edition also comes with a 60days free trial and also in a VMware appliance from, I would suggest try it out, if you are an integrator and exploring.

Some other interesting products I came across

This article has been brought you by Xoeis.com 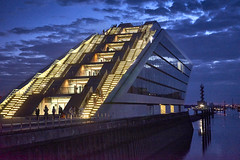